I am a qualified architect with 23 years’ experience. I have, from a young age, had a passion for drawing, sketching and the use of colour. During my employment with Grimshaw, I was able to hone this passion of designing through sketching, which eventually developed into the drawing of large scale interiors and exteriors of infrastructure projects and factories, residential developments and masterplans.

This culminated in taking part in the Invited Architectural Competition for the design and delivery of the Rolls Royce Factory and Headquarters in Chichester, for which I was the Project Architect. As the site was located in an area of Outstanding Natural Beauty, Nick Grimshaw encouraged me to draw the factory freehand rather than using digital render and modelling, so as to convey the ‘craftsman’s workshop concept. The extended AO freehand drawing was coloured with Prismalo coloured pencil on Cartridge paper. It was used as publicity for the project and eventually published in the Rolls-Royce Phantom book prepared by BMW entitled ‘The Goodwood Phantom – Dawn of a new era’. Published by Dalton Watson

After this project, I was assigned to work on the competition and design of Fulton Street Transport Interchange in New York. My freehand sketches proved to be instrumental in the development of the concept for the Oculus, a dramatic circular motif that permutated through the volume, and drove the eventual form of the roof.

Following on from this I elected to pursue a freelance career which enabled me to approach the film and movie industry. I contacted the production designer Alex McDowell with my portfolio. He asked me to work as a concept designer for the Tim Burton movie ‘Charlie and the Chocolate Factory’ produced by Warner Bros. The factory had been elevated and planned but the detailing and aerial views could not be modelled within the time frame for set construction. This led to 2D pencil drawings of the other factories and street scenes that would complement the ‘Bucket House’ set.
This role assisted my nomination and acceptance into the Film Designers Guild. In addition to this, I was able to start my IMDB profile as Paul Anthony McGill – Concept Artist.

Several film opportunities ensued which included an assignment as a Concept Designer for ‘Quantum of Solace’. (the 22nd James Bond movie) This was produced by EON productions, who latterly published my work in the book – ‘Bond by Design – The Art of James Bond Films’ published by DK.
With concept illustration exposure on a Bond film, I was asked by the production company Partizan / Traktor, to participate in the concept design of the second Virgin Atlantic television advert which had a very strong Bond Theme in 2010

I have conducted a series of ‘Drawing at Work’ workshops to promote the art of drawing for architects in offices, including Grimshaw – London and New York. I have also provided these structured seminars for Engineer offices, including Rambol Whitby Bird and Buro Happold in London. This introduced me as a visiting lecturer within Trevor Flynn’s Drawing Gym workshops for architects and engineers in London.

I continue to practise as an architect but with a fervent desire to conceptualise using pen, ink paper and colour. As an architect who can draw, I am able to illustrate numerous scenarios. Advertising and movie concept work allowed me to rediscover the immense benefits of 3D digital modelling, painterly Photoshop, in conjunction with Pencil and my 48 inch Mayline ruler and Strip Maple drawing board.

Recognition by the Society of Architectural illustrators would be an immense privilege. It would also assist my efforts to promote the art of illustration within the Architectural profession and further my own professional career.

Examples of work by Paul McGill 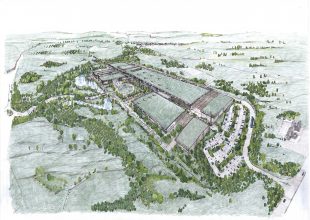 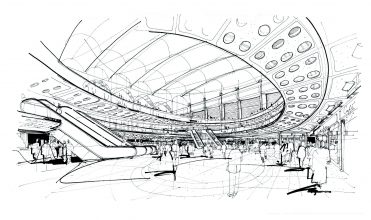 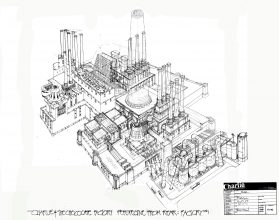 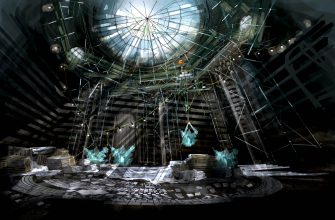